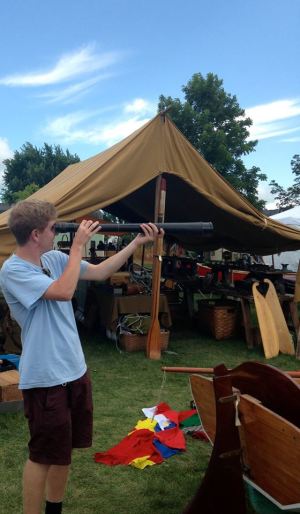 The light of our life left this world much too early on November 2, 2018. We miss him intensely. Our youngest son, Elliot Ross, was born on January 27, 1997 in Northampton, MA. From an early age, Elliot had a lust for life. He was a happy baby and loved his family. Verbose at an early age, he held himself as the family spokesperson--always ready to speak up and be heard. He found great joy in making friends and creating his community. Elliot always showed up for anyone who needed him. An artist, Elliot created beautiful sounds, starting with the flute at age five. He knew how to play to his audience, especially while busking in downtown Northampton. He had incredible talent but one day looked around the room and noticed he was the only boy! For many years after, amazing music still came out of his flute--but soon he switched to the other end of the spectrum and picked up the bass, learning to play stand up and electric. Music was an anchor for him. And being in a band brought together two things he loved: music and friends. As a member of the JFK Jazz Band, he learned how to play music cooperatively. From there, he played in bands, including Tatami and other collaborations with friends. Elliot will live on in his music and words. Listen to his music on Sound Cloud: https://soundcloud.com/user-420616792 and Band Camp: http://billinorthampton.bandcamp.com/. Elliot loved his big brother Simon dearly and loved spending time with him. On family hiking trips they were a team, blazing the path ahead. He loved being with family and with friends. Elliot was always instigating get-togethers with family or friends--inviting them for dinner, going for walks or hikes, and always connecting with people. He had dear, true friends in Northampton. He made deep and lasting friendships wherever he went, including Unirondack Camp, University of Denver, and his study abroad program in Southeast Asia. His spirit of adventure and love of exploring other cultures and places brought him around the world. Elliot's three months in Southeast Asia during the spring of 2016 were eye-opening, difficult, and joyful. He relished every moment of it. Trekking through Italy with his friend Mason in the fall of 2015 brought him much happiness and fun as well. Other adventures small and large, including night hikes, walks with the dog, and exploring London with friends brought him peace and love. Despite all of the many joyful and beautiful moments that he had, Elliot struggled mightily with mental illness. He dedicated himself to doing everything in his power to help himself: seeing his doctors and therapists and finding alternative therapies including yoga, meditation, and acupuncture. He tried very hard and, as a result, people know Elliot as a functioning, beautiful whole person. Elliot had many hopes and dreams for the immediate and distant future. He was excited about an upcoming trip to visit friends in Denver and spending the week skiing. He was dedicated to his schoolwork and was determined to complete his bachelor's degree. He had even researched graduate schools to continue his studies in cognitive neuroscience. Elliot wanted to better understand how the brain worked, including his own. He leaves his heartbroken family, mother Paula, father Hank, and brother Simon Ross and his beloved aunts, uncles and cousins: Jo-Anna Ross, and children Alexandra and Ellery (Los Angles); Robert and Priscilla Ross, and children Anna (New Orleans), Sebastian, and Theodore; Stephen and Melissa Ross, and children Lilly and Natalie, all others of Northampton; Marsha and John Rich, and children Hilary and Jackson of Bend, Oregon; Brenda Elias and Brent Thompson, and son Samuel of Helena, Montana. Also, Samantha Ross, Luane Ross, and children Judy, Autumn, Christina, and Eve Ross.  Please join us to celebrate Elliot on Saturday, November 10, 2018 at 2 pm at the Unitarian Society of Northampton and Florence. Bring joy and friendship in your hearts, and a story or memory of Elliot to share, if you chose to. Reception to follow at the Delaney House in Holyoke.
In lieu of flowers, donations to the Northampton Jazz Festival's Jazz in the Schools Program are welcomed. Checks payable to: 'Northampton Jazz Festival' (a 501(c)(3) non-profit) and can be mailed to:136 South Street, Northampton, MA 01060. Please write 'Jazz in the Schools Program - in memory of Elliot' on the memo line of your check.